skip to main | skip to sidebar

Wrasse are often wrongly identified, the following will help you identify what you have caught.
None of the wrasse are considered as a food fish so catch and release is the way to go. 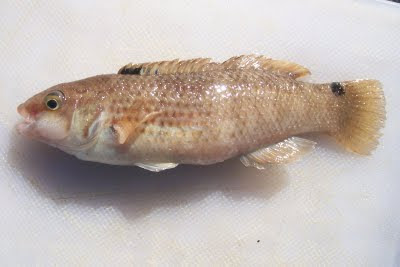 
The fish illustrated, which I caught from The Stone Pier at Weymouth, is particularly pale but illustrates well the distinguishing black spots....one at the top of the tail root and one at the beginning of the dorsal fin. They have thick lips compared to other wrasse species and have a shallow profile, the Ballan and Corkwing are much deeper in the belly. They do not grow very big, most of the fish caught will be 12cm or less. Best bait is a piece of ragworm fished near the bottom near weeds/rocks on a hook size 4 or smaller. Another Wrasse, the Corkwing, has a spot on the wrist of the tail but it is central, not on the top edge. 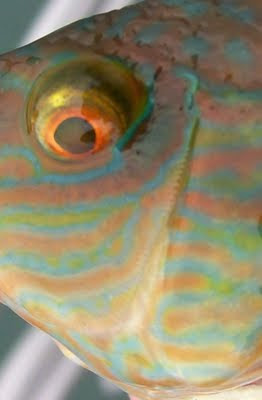 The easiest wrasse to identify if you know what to look for, behind the eye and in front of the gill cover you will see tiny serrations or grooves like the edge of a pound coin. No other common wrasse has this feature. The Baillon's Wrasse also has this feature but is not commonly caught.
There is confusion however because the male and female have different markings. The male is the more showy, having iridescent green and gold wavy lines on his head. They show especially well in sunlight. 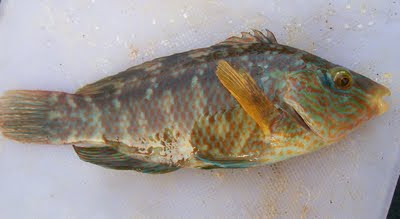 The female is dowdier and has a cork-tile like colouration, the spot in the centre of the wrist of the tail is distinctive. 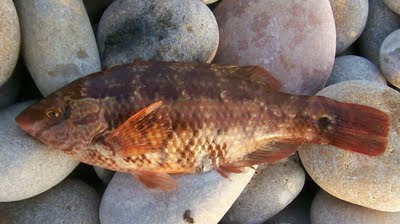 
The Corkwing Wrasse can grow up to 25cm long but a fish of half that length would be more typical. Like all wrasse a piece of ragworm on a small hook will entice them, they can be caught in open water but are more likely to be caught near the shelter of rocks and weed. The dorsal fin contains spines which are not apparent until you grasp the fish.

You will learn to hold it from the underside.

The largest of the British Wrasses the Ballan can show a bewildering range of colouration from lime green, through various shades of brown, to dark purple with white spots. 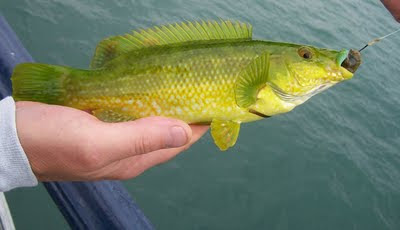 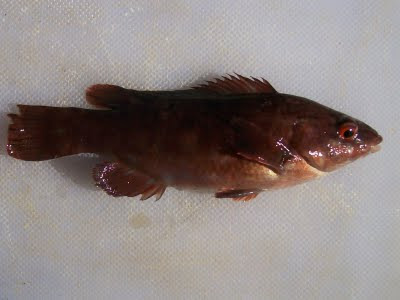 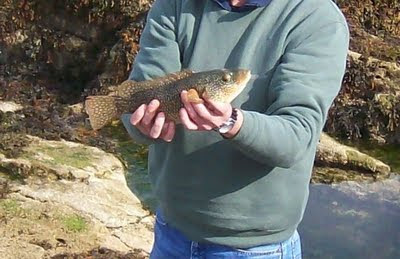 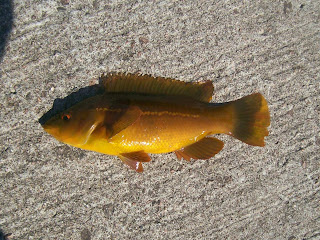 You will sometimes catch a wrasse that is overall one shade of brown/gold all over with a very distinctive row of large scales down its flanks... you think it's a new species... but it's  just another of the myriad of variations of ballan colouration.

The Ballan grows to 60cm or more in length and is a bit of a thug when caught, it will head for the nearest weed and rocks and will often snag the line, it is a hard fighting fish and considerable pressure is needed to stop it heading snag-ward . If it is snagged then patience can help, leave it for a few minutes and it may well swim back out of the snag. If large wrasse are around it is best to hold your rod or prop it securely so that it is not pulled in.
It has spines in the dorsal fin so handle carefully. The British record for Ballan Wrasse fish stands at 9lb 1oz. Larger wrasse are quite happy to take fish strip, squid or sandeel, a livebait, or a lure, smaller fish tend to go for worm baits, especially ragworm.


The most colourful of the British wrasses, it grows to about 35cm long and is found in the company of other wrasse species over rough weedy or rocky ground. The male and the female are quite different in colouration but have the same body shape, they are a leaner fish than the Ballan or Corkwing and have a pointed face. The colouration changes during the year, a breeding fish will have a different colour scheme to an immature non-breeding fish. The examples shown were caught at the same spot in Swanage Bay and are darker than fish caught further west along the coast where the female is more beige than copper coloured. 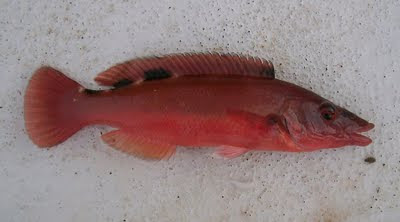 
The male has the iridescent wavy lines that are seen on the male Corkwing and the Rock Cook but the lines are distinctly blue and not the blue/green of the Corkwing; they extend right to the tail whereas the Corkwing shows mainly on the head and shoulders. The fringes of the fins are also distinctly coloured.


The Cuckoo Wrasse is less likely to be caught from the shore unless fishing into deep water, it will take most baits but ragworm can be counted on to catch. Why it is called cuckoo is subject to speculation..... it shares no similarity with the bird but shares the sound of its name with the Rock Cook....which is also an odd name. My suspicion is that there was an old dialect/Cornish/Breton/Welsh word that was pronounced cook but meant neither a bird or a chef, but something quite different. 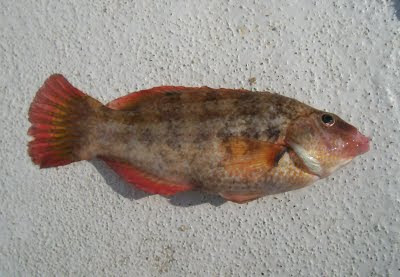 
Baillon's Wrasse is one of the rarer species; the one illustrated above was caught in 120 feet of water off Swanage. It was 24cm long and weighed 200g and was caught using baited feathers fished on the bottom, ragworm proved its undoing as with the other wrasse species. They are often caught from the pier at Swanage, they have become increasingly common over the last few years; they are most likely caught in many other locations but are disregarded having been thought to be just another corkwing wrasse. There are similarities, the mottled brown colouration is quite like the corkwing female but there is distinct banding on the Baillon's, there is some iridescent blue and yellow colouration about the head but it is not as pronounced as on the male corkwing. The orange spots are not found on other species. The front of the gill cover has the serrated edge as found on the corkwing.
The defining feature of this wrasse is the colouration of the fins which are unmistakably red. 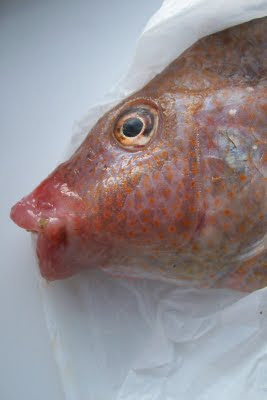 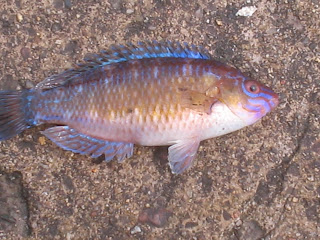 This small wrasse might be confused with the male Corkwing but the wavy iridescent markings are quite a definite blue rather than the blue green of that species. It is one of the smaller wrasse seldom growing more than about 15cm long; it is rather more dumpy than the corkwing and has a small mouth with fleshy lips.
It is not as widespread as the corkwing or ballan, I have caught them at Weymouth and this specimen was caught at Brixham Breakwater by float-fishing a tiny piece of ragworm on a size 4 hook. The wrasse tend to be in the weed and rock so float-fishing deep so that the bait  passes directly over the weed is effective and tackle loss kept to a minimum.

there is also the Rainbow Wrasse to be added when ( if ? ) I catch one to photograph....


for further reading, The Aquarium Project is a good reference site

if you want to advertise your bivvies you could pay me rather than spam my comments..... any further comments by you will be deleted... which is as polite a way as I can think of to tell you to **** off

Thanks for putting the pictures up! Could not identify what i caught turns out it was a juvenile wrasse! Thank you again!

Thanks for such clear photos and identification - wish I'd seen this site earlier. Great help!

Hi haddock cracking work do you mind if I use your wrase id for my wrasse Facebook group. ..credits go to you and your site...you can email me at debdav@blueyonder.co.uk names david rogers of the wrasse disciples

Hi Haddock.caught a wrasse today and thought it was a cuckoo wrasse but thanks to your great identification photos it was a corkwing. Caught a4.3lb ballon wrasse two weeks ago.jack sprat...

Biggest tides are at full moon or no moon.

Haddock, not a fish or a captain

Welcome to my sea angling blog. I will be posting photographs, descriptions of places to fish and other snippets which are fishy related. I hope to build up an information base to enable others to share in my experience, and perhaps encourage others to get out and enjoy being by the sea. I am aiming this at children, beginners and novices, please leave comments, that way I will know that I'm not just talking to myself here. .

Charter Boats that I use now and then